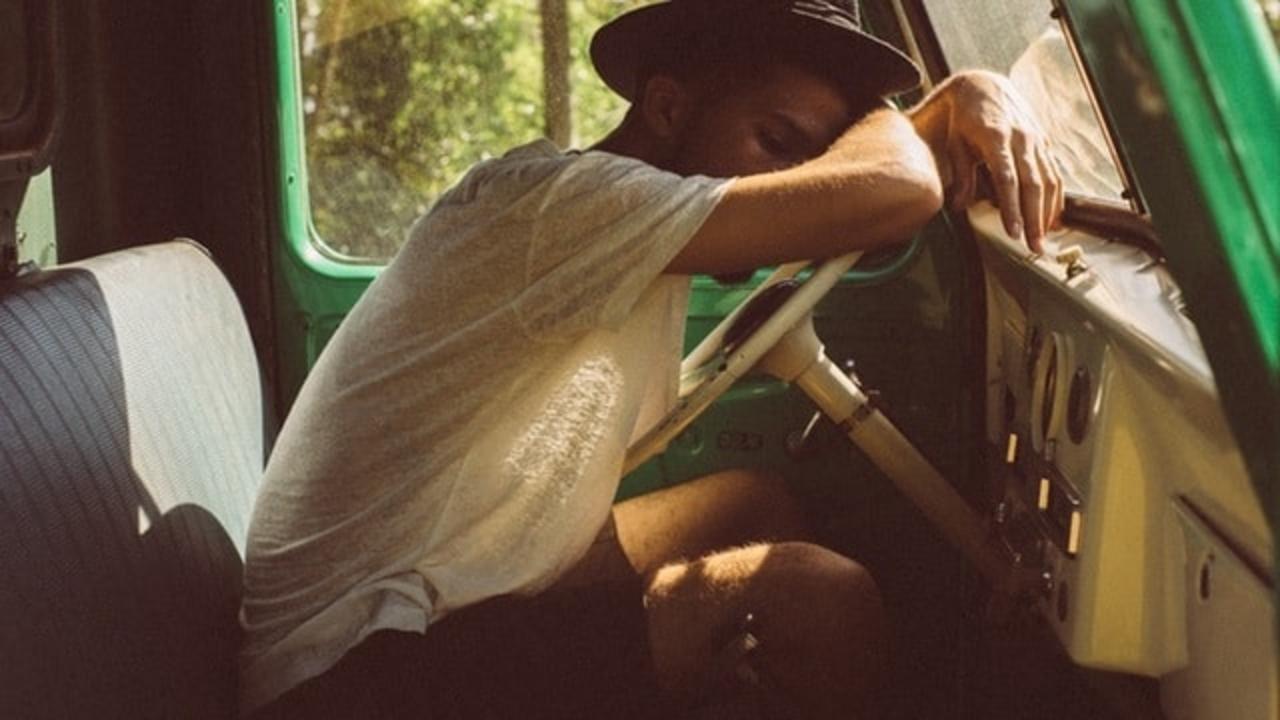 The health trends among children and adults are alarming. Sophia Ruan Gushee, author of A to Z of D-Toxing, wants more people to consider the role of environmental factors that we can control: toxic exposures from what we buy.

I grew up during the 1970s and 1980s in upstate New York — in Binghamton, a city of about 200,000 residents at the time. I attended various schools that were diverse: a Jewish nursery school with approximately 15 to 20 children per class; a public elementary school for kindergarten through second grade with class sizes of approximately 33; a Catholic school with about 33 students per class; and then a public high school with approximately 400 students per grade. I don’t recall a student who had an allergy or a chronic condition worth mentioning. In fact, based on my childhood experiences, I believed that children didn’t get sick, except for things like a cold, the flu, and chicken pox.

Today, a shift has occurred among all of us, but especially among our kids. As a new mother, I wanted to make sense of the endless media headlines about the alarming health trends among children. As I sought to understand the big picture while collecting statistics, the emerging portrait concerned me.

HEALTH TRENDS AMONG OUR CHILDREN

Parents of all generations have worked to protect their children from specific threats. In prior generations, threats included infectious diseases, such as polio, smallpox, whooping cough, and measles. Modern medicine has largely controlled these and other illnesses that once harmed or killed millions of children. Our current generation of children, however, faces a different set of health threats.

Pediatric health trends have attracted concern. Figure #01 (above) provides a variety of statistics based on reports by leading organizations such as the World Health Organization (WHO) and United Nations Environment Programme (UNEP), the President’s Cancer Panel (PCP), the Endocrine Disruption Exchange, the US Centers for Disease Control and Prevention (CDC), and the Children’s Environmental Health Center at Mount Sinai Hospital (CEHC).

As you can surmise from the statistics in figure #01, the portion of children suffering from chronic health conditions has “increased dramatically” (Perrin, Bloom, and Gortmaker 2007). Data for 1988 to 2006 indicate that the incidence of chronic health conditions among children more than doubled during that period, from 12.8 percent to 26.6 percent, according to an article published in the Journal of the American Medical Association. The authors note that over the past 30 years, the most marked increases have been seen for asthma, obesity, and behavior and learning problems such as attention deficit/hyperactivity disorder (Van Cleave, Gortmaker, and Perrin 2010).

In another study, which examined data from the 2007 National Survey of Children’s Health, approximately 43 percent, or 32 million, US children were estimated to have at least one of 20 chronic conditions. This estimate increased to 54.1 percent when overweight, obesity, and being at risk for developmental delays were considered (Bethell et al. 2011).

More recently, the number of children diagnosed with one or more chronic health conditions was estimated to have “quadrupled” over the past four decades (Stephens 2014).

Surely these statistics provide only part of the story, since details on the design and execution of studies and surveys, among other factors, are important in interpreting the data. However, the reality is clear: There is something unusual happening with our kids, and no one fully understands the causes.

A growing portion of adults is also suffering from a variety of health issues, as figure #02 (below) shows. Chronic conditions afflict almost half of us, or 117 million Americans (CDC 2014c). Increasing reports of illnesses and disorders span a wide spectrum of diagnoses: obesity, diabetes, allergies, autoimmune diseases, heart disease, cancer, inflammatory illnesses, reproductive challenges, and others. In 2010, chronic diseases accounted for seven of the top 10 causes of death in this country (CDC 2014c).

Americans aren’t alone in these trends either. Chronic diseases are the main causes of sickness and death worldwide (WHO 2011b; WHO and UNEP 2013). 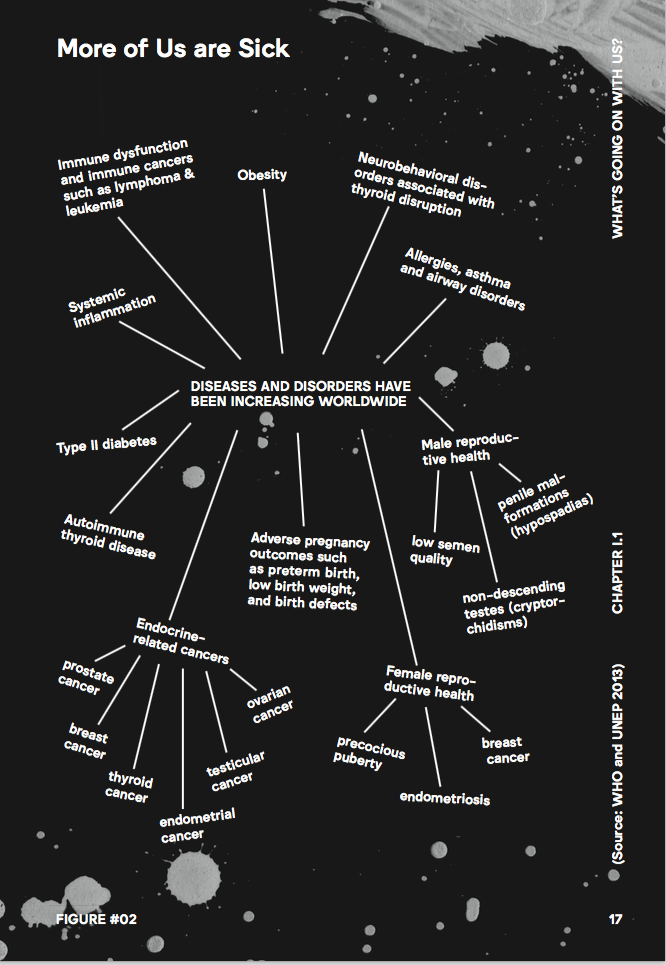 THE STATISTICS AND TRENDS ARE TOO HARD TO BELIEVE

When confronted by reports of increased incidence of diseases and disorders, people can’t believe the data. They assume, “Oh, it must be genetics.” When hearing about skyrocketing rates of autism, a common re- action is “It must be from sharper or earlier diagnoses or from broader definitions.” It’s just too hard to believe that the increases could be so significant.

Studies have explored these questions. In the following sections, I share what I learned about investigations of these questions as they pertain to pediatric cancers and neurotoxicity, since these were discussed in credible sources. In short, investigators have determined that even after accounting for factors like genetics and improved diagnostic capability, the incidences of certain disorders have increased enough to raise eyebrows.

WHY HAVE THE INCIDENCES OF PEDIATRIC CANCER STEADILY INCREASED?

Although cancer in children is rare (NCI 2014), incidences have been increasing. In 2010, the PCP, which reports to the president of the US, released a report titled Reducing Environmental Cancer Risk: What We Can Do Now. It states that the increased incidences of pediatric cancers “have been too rapid to be of genetic origin.” Improved diagnostic techniques — like computed tomography (CT) and magnetic resonance imaging (MRI) — might explain a one-time spike in rates around the time of certain events, such as the introduction of newer imaging equipment. However, something unidentified is also contributing (Reuben 2010).

While mortality from childhood cancer has gone sharply down, incidence rates are increasing. There has been a 55 percent increase from 1975 to 2005 in the incidence of leukemia in 0- to 14-year-olds and an 81 percent increase for acute lymphocytic leukemia — the most common type of leukemia. Incidence of cancer of the brain and nervous system has increased 39 percent. Testicular cancer, which primarily occurs in 15- to 30-year-olds, has increased by 51 percent in white males and by 45 percent in black males. The explanation for this increase may be due in part to better diagnostics, but this alone does not account for the continued inexorable rise. Serious consideration must be given to the possibility that environmental factors are involved. (Leffall 2008)

Autism has increased 289.5 percent over the past 12 years, an increase that is too large to be explained by genetics (CDC 2012a; Boyle et al. 2011). In California, it increased even more: The number of people diagnosed with autistic spectrum disorder grew 1,148 percent from 1987 to 2007, while the general population in California grew just 27 percent during this time (Cavagnaro 2007). Scientists have been trying to identify the drivers behind this trend.

Researchers in the Department of Public Health Science at the University of California, Davis examined autism cases reported in California from 1990 through 2006. In 1990, 205 cases were reported. The number increased 1,363 percent to more than 3,000 cases in 2006 (Cone 2009a; Hertz-Picciotto and Delwiche 2009).

Some of the increase in reports of autism was explained by the inclusion of milder cases (56 percent increase), diagnosis at younger ages (24 percent), and changes in state reporting requirements for autism (120 percent). Collectively, however, these factors explain less than half of the reported increases during the study’s time period (Cone 2009a; Hertz-Picciotto and Delwiche 2009).

According to information from Autism Speaks, a leading autism advocacy organization, after considering sharper diagnosis, broader diagnosis, and more awareness of the disorder, roughly half of the increase in diagnoses can’t be explained (Falco 2012). The organization recognizes that a genetic predisposition, in combination with various environmental — which broadly encompass the nongenetic — factors, increases the risk of a child developing autism (Halladay 2014).

An expanding body of evidence indicates that early-life exposure to developmental neurotoxicants is probably one of several influential factors (Grandjean and Landrigan 2014; WHO 2011a; Cone 2009a; Braun et al. 2014). In fact, autism is part of a broader trend.

In March 2014, Dr. Landrigan and Philippe Grandjean MD PhD, adjunct professor at the Harvard School of Public Health, authored a seminal review, “Neurobehavioural Effects of Developmental Toxicity,” in The Lancet Neurology, a prestigious medical journal. Focusing on the neurotoxicity of certain industrial chemicals that can undermine the normal development of the brain prenatally and during childhood, the authors describe a “global pandemic of neurodevelopmental disorders” that affects millions of children worldwide (Grandjean and Landrigan 2014).

The authors estimate that genetic factors may explain no more than 30 to 40 percent of the diagnosed cases of neurodevelopmental disorders and that nongenetic, environmental exposures may be important contributors.

UNIDENTIFIED FACTORS ARE MAKING MORE OF US SICK

The health statistics and trends, as well as the significance of the underlying studies, can be debated. And trends will change — certain illnesses will increase, others will flatten or decrease. However, the global perspective is clear: More children and adults are suffering from chronic illnesses and other health challenges. While researchers actively explore the contributing factors, the role of environmental variables seems increasingly certain.

Chapter I.1 of A to Z of D-Toxing: The Ultimate Guide to Reducing Our Toxic Exposures. References available here: Part I’s Works Cited.